IN THE EYE OF THE TIGER

Tom Liekens Tom Liekens has a completely unique position in the Belgian art landscape. Both his subjects and the way in which he elaborates them into monumental paintings and collages make him one of the most original painters of his generation. His interest in nature is striking. He is fascinated by the unrealistic way in which fauna and flora are presented in paintings, in fairy tales or in films. The artificial world of zoos, natural history museums and tropical greenhouses is also a permanent source of inspiration. Again and again his work is overloaded with art and cultural-historical references.

Tom Liekens lives and works in Antwerp where he graduated in 1999 from the Royal Academy of Fine Arts. Since then he has participated in numerous exhibitions, won the Camille Huysmans Prize for Painting (2006), and was nominated for the Visual Arts Prize of the Province of Antwerp (2005). Three large monographs of his work have already been published. His work is part of numerous private collections as well as public collections such as the Museum of Contemporary Art (MUHKA), Bank Belfius, National Bank Belgium, Artesis Antwerp University, Antwerp University, Art collection Province of Antwerp and Museum Van Bommel-Van Dam Venlo.

IN THE EYE OF THE TIGER

There is no better starting point than a disillusioned conversation between a bear, a rabbit and a panda in a lonely bat cave to illustrate one of the many facets of the work by Antwerp-based painter Tom Liekens. Like the man, the representation in his 2009 Waldeinsamkeit (literally translated as one’s feeling of being alone in the woods) is complex, fragile yet powerful, and like many of his large canvases, it dances on the edge of danger, on the brink of extinction. Tom Liekens brushes, perhaps sometimes unconsciously, the portrait of a species about to disappear and while his many thematic series depict wild beasts, empty natural history interiors as still lives, or baroque piles of dead animals, the subject matter throughout his body of work is clearly mankind, for all his detoured visual metaphors seem to paint the grim portrait of us - who we are, who we were and what is to become of us.

Liekens’s wild and powerful colours hit the eye like rhymes of poetry in what I would describe as a gigantic neo-expressionist fauvism of the new century. The approach and the message are in no way one sided. Rather, they play on the nuance inherent to our species to remind us of our myths, our heroes, and our legacy. Predominantly, it is a sense of unease and violence that emanates from the oils and collages on canvas – the colourful brightness of the former echoed by the monochromatic contrasts of the latter. I would also argue that there is a spirit of surrealism in the artist’s work, perhaps not like the surrealism that marked the first half of the XXth century, but clearly present for the same reason - to underline the absurdity of the human condition. Independently of how one might try to approach and categorize the work, it is a truly singular language, too far from the Neue Leipziger Schule, too estranged from his own mentor Fred Bervoets’s epic oils and prints. Like the work of Peter Doig or Michael Armitage it stands on its own, uniquely recognizable and communicative.

But through this reverse process of visual shock, the Belgian artist challenges our perception and interrogates our responsibilities as ruling animals of this planet. Far from any moralistic ambitions, he lays subtle tracks of healing so we may find a new equilibrium, a better balance, and continue to evolve as a species. I challenged the artist to come up with 13 retrospective works, which I would then reorganise into my own random narrative sequence that would translate my understanding of his work so far and how it moves me. I call these the 13 windows of loneliness.

Animals populate Liekens’s world, both on canvas and at home, where he lives among live birds, lizards and cats, not to mention the stuffed bison head majestically throning his living room, as an ode to fauna, dead and alive. Focusing on In the Eye of the Tiger (2010), where tigers lie at the feet of a mighty lion who is still being challenged by a leopard and an elephant, I wonder at what cost this position of supremacy was acquired? The small dear on the right of the pyramidal composition is having second thoughts about its own ambitions of power. This work is about untamed power, and it radiates it.

“We are hunters” seems to cry out this portrait where a man is sitting at the feet of a massive bed in a lush interior of trophy-hunting accumulations. Enigmatically, I question what the artist shows us here. Is this man a hunter or does he pretend to be one, for status or for nostalgia of what most men must have been ages ago? Skins and horns serve as ostentatious reminders of what we kill for glory rather than for our sustenance. This composition is one of deep solitude and asks what will be left once we have dominated all. Like cats, humans can kill for sport, contrary to most species which only end another life to preserve their own.

It is a human cruelty that is perfectly captured in Delacroix’s Dream (2016), where Liekens’s neo-baroque movement appears as homage to the French master’s series around the Lion Hunt. Yet here it is people who are being thrown into a lion-infested pit. The hunter become the hunted. Finely executed with unique woodcuts that the artist then collages on canvas, the organic feeling that emanates from this large work brings me back to ancestral tales of madness, to antique worlds of anarchy in which morality had yet to appear.

But where rules folly and all hope is lost, warmth and empathy often intervene as counterbalance. In Canada (2009), a woman seems to be saving a racoon from a devastating fire. Far from depicting the recent wildfires in Australia, which have claimed the lives of so many koalas or wombats, Liekens nourishes a passion for the depiction of forests and flora, which he often portrays in fauvist pinks and purples that make me think of the sublime skies of André Brasilier. The devastating loneliness in this particular painting is being healed by an act of love, a rescue.

Now onto one of my favourite works, Barbizon (2018). In this daunting collage of woodcuts and unique prints of inked plants based on the forest in Barbizon, an apocalyptic rider stares back at us, as if asking us why we are following him on his journey into darkness. The vertical composition reunites all three characters from Dürer’s Knight, Death and the Devil (1513) into a ghoulish carnivalesque figure that seems out of place - another reminder that death is inevitable, a sort of momento mori that forces us to focus, even for an instant, on the frailty of our existence.

For like mad dogs we pursue futile objectives while life passes us by. In Onvoltooid Verleden (2012), dogs tear each other apart. This bestiality beyond all measure is again enigmatic, because the painter does not give us any ground for it. As we naturally humanize these familiar animals, their morbid dance becomes a metaphorical depiction of our condition. Thus, it seems we constantly stand on the abyss of losing all reason, despite our many wisdoms and our profound desire to live together.

And like beasts, we too will be studied, dissected, emptied, stuffed and stored - eternal memorabilia of our failed rule of the earth. Like old lions, we will ornate the walls of those who will be kings after we are gone. In Taxidermist (2014), the lonely profession, here punctuated by the majesty of its pretend creations, becomes the subject of another powerful work by Liekens who calls our attention to the worlds of illusions that we build to occult certain truths because of our paradoxical human denial.

In Kongo Room (2014), we are confronted with a nostalgic representation of a colonial treasure room made of exquisite woodcuts where animal remains are displayed along traditional ceremonial objects from Africa. The collage suggests that we looked at our fauna the same way we looked at cultures we came to “rule” in the past. Out of their context, the stuffed wildebeest and the Mende helmet mask cease to exist and become reflections of who we are when we display them. This work is part of a series of delicate black and white empty interiors which have been created out of woodcuts and reproductions of historical engravings. The fact there are no humans in them (anymore) make me feel that these belong to a past that we have hopefully abandoned.

In the current context of doomsday scenarios of climate change and food crises, tainted by the recurring mutating pandemics, it is easy to give in to the psychosis that we are on the verge of extinction. In reality, humankind has faced similarly impossible challenges many times over in the past millennia. It is our collaborative creativity that has allowed us to become who we are today. Our intelligence, like the white Unicorn in this painting, came to save the day more often than not, contributing to the unprecedented rise of the ape, which is celebrated in the next collage.

As already mentioned, Tom Liekens often works in series, some even based on classic films like Lust for Life (1956) or King Kong (1933). In the paintings and collages based on images of the latter movie, the giant ape defeats a dinosaur thanks to his opposable thumbs and the superior intelligence that allows him to create weapons. So not all is lost if you ask me. We are perhaps passed the 11th hour according to some like these three characters below, sitting in a cave, head down, disillusioned – but I truly believe that we can rise to the challenge, change trajectories and evolve.

In Waldeinsamkeit (2009), sharing their fatigue around a casserole and a fire warming a cave of stalactites, a storm raging outside, three humans dressed as cartoon-like animals almost seem grieving. They are perhaps deploring the faith of their species or that of the animals they pretend to be. The answer is immaterial to the exacerbated feeling of solitude that evaporates from this anachronic picture. And as these three childish fakes fall asleep, we hear raindrops dying in the fire, a truly cinematic experience.

To conclude, I chose to present two works bearing the same title next to each other. Birds (2009) and Birds (2018) showcase distinctive styles by which the artist came to be recognized. While humans have fed on mother nature throughout our existence, and now often abuse her kindness as in the painting of a woman eating a parrot below, nature always prevails. Man is increasingly disrupted by constant reminders that he is not alone on this planet - like in this last collage, a self-portrait in which the artist is being attacked by pigeons, calling my attention to the fact that we cannot escape our crucial position as part of the Whole. The signs are there, it is up to us to listen and like tigers, to rise up to the challenge. 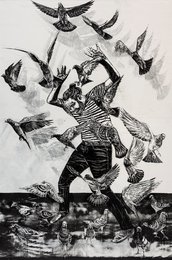