IN COLLABORATION WITH DE ZWARTE PANTER

A lawyer turned journalist, Kiro Urdin studied art and cinema in Paris in the seventies and has been painting since 1985. He is known for his energetic paintings which have been exhibited worldwide since 1986 in cities like Paris, Yokohama, Los Angeles, London, Stockholm and Bratislava. During the same period, in 1988, Kiro went to New York and Hollywood to pursue his film ambitions. There he directed four films, and he keeps on directing documentaries and experimental films today.

In 1996 Kiro embarked on an epic journey around the world to create the first painting to be worked on all over the world. His idea was to incorporate a piece from every place he visited, thus symbolically bringing the world together in one undivided unity. It took him two years and over thirty locations, from big urban cities to ancient world sites: the Wailing Wall in Jerusalem and the Tomb of Jesus Christ, New York, The Berlin Wall, Ohrid, Brussels, Knokke-Zoute, Bruges, Paris, Rome, Pompeii, Pisa, the Suez Canal, London, Stonehenge, Athens, the Nile, the Great Pyramids in Giza, Kenya, Machu Picchu, Cuzco, Bangkok, the Forbidden City and the Great Wall of China, Tokyo, Kamakura, Mont Saint-Michel, and Eindhoven.

A Macedonian film crew was hired to document the effort. Planetarium. the documentary film was subsequently released. Directed by Ivan Mitevski, it won Best Documentary at the New York International Independent Film and Documentary Festival in 2005. A monograph with photos taken during the two-year trip by Marin Dimevski was released simultaneously to the movie. Today the painting is exhibited at the Danubiana Meulensteen Art Museum in Bratislava.

Planetarium Dance is collaboration project between Kiro Urdin and Toronto-based choreographer Debbie Wilson. On seeing the film, Debbie approached Kiro and proposed to expand the Planetarium experience through a new medium - dance. Macedonian composer Venko Serafimov was called onboard to compose the music for the dance. The ballet features eight dancers from Wilson’s own troupe, a local Toronto contemporary dance company, and seven from the classically trained Macedonian National Theatre. Planetarium Dance premiered at the Toronto Dance Theater (Canada), and since has been performed in Ohrid, Heraclea, Skopje, Chicago, Ankara, and during the commemoration of the United Nations 60th Anniversary in Geneva (Switzerland).

Urdin’s work has evolved beyond traditional media like film and paintings to include dance, sculpture, literature, photography, philosophy and design. He has published over 15 books, some with his thousands of aphorisms, and one book of poetry entitled Novel, from which his poem Light was selected for the Pushkin Festival in Moscow.

Working from Belgium, Macedonia and the U.S.A., Kiro Urdin is vibrantly driven in his efforts by one unifying philosophy: to bridge different cultures together, and to bring all art forms into one. Or as he defines the slogan of the Planetarism movement which he founded: 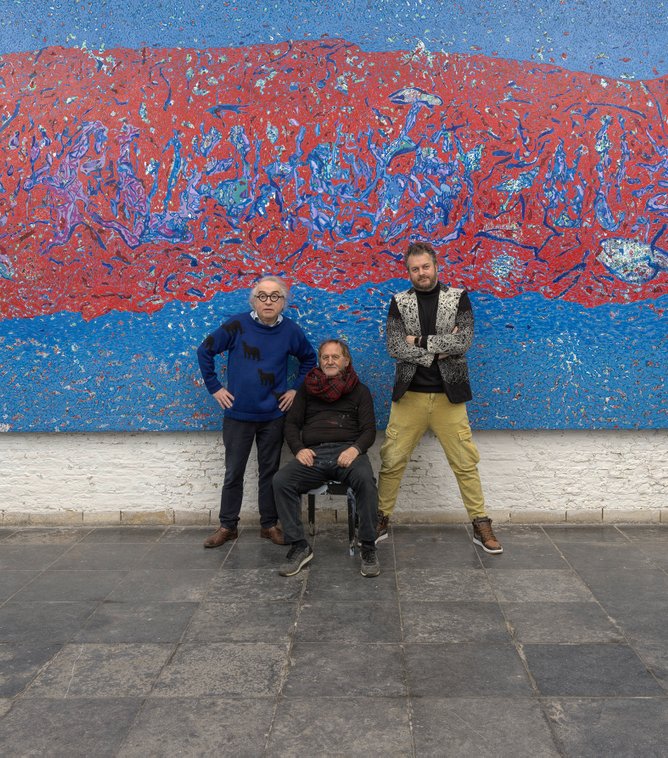 Tabula Rasa marks the first solo show of Kiro Urdin in Antwerp and his strong return to the art scene post COVID lockdowns. It coincides with the French Minister of Culture, Roselyne Bachelot-Narquin awarding the artist the rank of Chevalier of the Order of Arts and Letters.

More personally, this collaboration with Kloser Contemporary Art and the historical art powerhouse that is De Zwarte Panter, is an opportunity to exhibit a unique ensemble of works, including some that carry a deep historic value for Urdin, who started painting in Paris in the mid-80s.

Center to this carefully selected panorama lies a so-called “performance piece”, a ten-meter-wide canvas which the artist started painting in October 2021. Tailored for the largest wall of the chapel at De Zwarte Panter, this monumental work explores the artist’s creative process, his own mystic inspirations, his passion for Greek philosophy, and his very own movement, Planetarism.

The underlying concept of Tabula Rasa, the title Urdin gives to this work, also his largest in years, directly refers to the theory according to which people are born without built-in mental content, and therefore, that all knowledge comes from experience or perception. This premise allows the artist to revisit his own creation, an existential celebration of creativity which he explores by using both abstraction and figuration, in black, in white and in colour, as channelled by his gestural painting style, which has been documented in the accompanying film about the process surrounding the making of Tablua Rasa.

Rebounding on this idea of a clean slate, Urdin allows himself to be guided by the point, that central element in his philosophy of Planetarism, and approaches artistic interpretations of perception under a dual lens which draws the viewer to contemplate both the constituting details as well as the wider pictorial universe - almost like an atomical time travel into our own reflections of the cosmos and our place in it.

Like the human mind, this canvas starts blank. It acquires different properties when impressions of the exterior act upon it, namely the action-reaction of the artist; referring to Kiro Urdin’s own definition of art, as an untamed energy channelled by human beings onto matter. He goes on to say that “art is mostly about allowing the unknown to materialize through our actions. As soon as we know what we are aiming to achieve, and how to get there, it becomes technique.”

As viewers, we semi-consciously expose our very own tabula to the external experiences of our world. Images, whether consumed on the news, or coming from the moving people outside, or the paintings we stand in front of, create an infinity of imprints on our perspectives, on our thinking, and on our mood. This infinity of things seen and accumulated since the moment we are born defines who we are. Obviously, there are plenty of other senses, other than sight, which contribute to our perception of the world, but what Kiro Urdin shows us with this painting is that we should always be conscious of what makes us, just as he consciously creates a multi-layered topography of pictorial elements which can later only be decomposed by tech scan of the various underlayers of his final composition. Yet, each layer contributes to the whole. To paraphrase his own philosophy: “One Point everywhere, everything in one point. One Art everywhere, everything in one Art.”

As expressed in the writings of John Locke in the seventeenth century, the concept of tabula rasa implies that we are somehow free to define ourselves according to our own rules, no matter how much we may be part of a human society ruled by its own set of principles. Sigmund Freud’s nineteenth century psychoanalysis went on to claim that humans are lacking that same free will, for they are mostly shaped by their own upbringing. Urdin’s practice accordingly stands out as the visual illustration of both these interpretations, in that it starts with seemingly random points of splashed paint on a white canvas, on which the artist is widely free to exist as a vehicle of artistic energy. But progressively, these very same points trigger interpretations and reactions from the artist, who sometimes adds to them, or brushes them off, continuously augmenting his own identity on the giant empty surface.

And on and on it goes, as the canvas slowly fills with a first layer of cosmic points and nebulas which form the rich universe on which Urdin will soon start building the more complex visual ensembles that have become his signature over the past couple of decades.

For the Franco-Macedonian multidisciplinary artist, all art forms are connected through a fundamental concern about life, death, and togetherness. His films, often awarded for their experimental features, aspire to a universality which is similarly found in his written work, as well as in his more figurative paintings on paper. While working on Tabula Rasa, Urdin wrote some hundred aphorisms, these short statements which contain general truths. But what is truth if not a matter of perspective? His most recent film, Before & After, tells the story of a wildebeest and a buffalo, who seemingly live close to each other for the better part of their life, until fate delivers them to the blunt cruelty of death. There again, truthfulness is artistically suggested, but when looked at outside the artifices of cinema, the recordings demonstrate the universality of the principles of life and death, and how those apply to all species of the animal kingdom.

It would be pointless to place the artist in any other movement than his own, for he is truly individual. Yet, there are aspects of his work which inevitably draw on the history of art of the XXth century, however never as “being influence by”. One could find echoes with Pollock’s action-packed abstract expressionism, or Geroges Mathieu’s lyrical abstraction, or even Toshimitsu Imai’s very own art informel which also coincided with the Gutai movement in Japan. Coincidently or not, Urdin showed work along Imai’s the early 90s. Arguably, all these artists were concerned with the kinetic essence of art as channeled through the human body. Over the years, critics have also made analogies between Kiro Urdin’s work and CoBrA, a European avant-garde movement active from 1948 to 1951, which was a celebration of freedom, colour and form. Maybe there lie the qualities of the comparison, otherwise completely disconnected. The fact that Urdin does not belong to a wide contemporary movement allows him to freely move from abstraction to figuration, sometimes blending both, without ever having to mark a clean break with earlier work. This exhibition is a powerful reminder of his existential quest for that freedom.

Outside of the chapel, one comes across large formats in oils which have marked the artist’s creation since the early noughties. These are accompanied by slightly smaller but equally gripping recent works which are part of the later “cosmic period” in Urdin’s work. Over the last decade an increasing share of his production on canvas seems concerned with the idea of cyclicality, rebirth, and the universe, as if the environment was gaining ground on the human sphere. I often wondered how consciously the artist was giving precedence to the preservation of our planet, and as is typically the case, he never answered my query. But this relatively recent evolution in his work coincides with increasingly longer trips into the wilderness, a taste for a monastic life if compared to his bohemian beginnings, and the concerns of a father for the next generations.

The underground rooms display an ensemble of works on paper. These watercolors on paper illustrate a technique that made the artist an instant star in Japan in the early nineties. Urdin achieves graceful transparencies in the medium, and the smaller format invites him to consider subjects of proximity like the human form, female the more often.

So perhaps it was meant that this catalogue shows the photographs of the artistic process of making Tabula Rasa without any postproduction, or reframing. These pictures are raw, and as such, translate the mood that tainted the making of this epic canvas over the many wet months making the autumn of 2021. What the artist created is what you see here. We did not try to embellish it in any fashion.

Kiro Urdin’s work is apolitical in nature, even if some people may think that all art is political. When magnetically drawn to its blue and red hues, we are faced with endless perspectives. I would even dare to claim that the effect is akin to that of a clean slate, since for an instant we forget where and when we are, even what we are. We just float, like on an ocean wave that we just crashed into, blinding us with just enough salt to wipe our reality from our eyes. In that instant, we are all as one with the universe, truly connected. 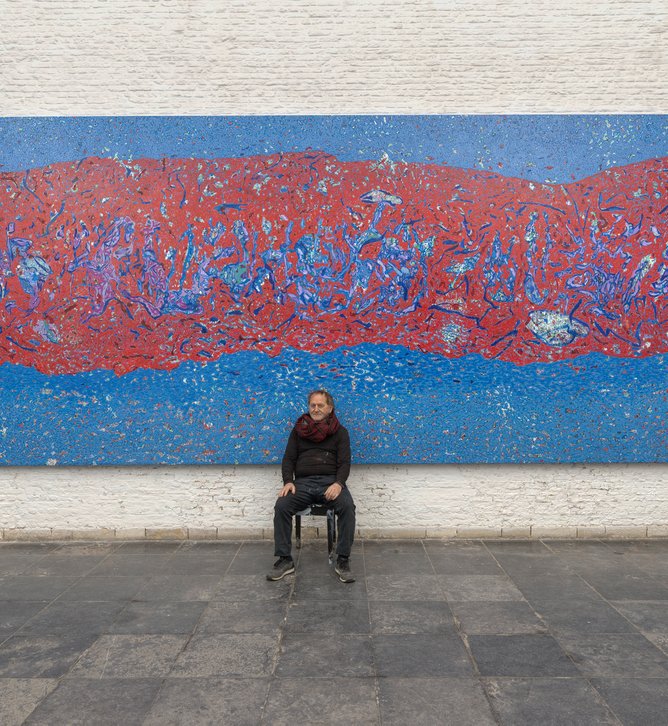